This sunday is the 87th Academy Awards Ceremony... and while it is not as high profile as last year's, it still has potential. Let me begin by predicting Neil Patrick Harris will make an awesome host, which should be no surprise since they've gotten that right almost every year.

Other things they do get wrong..... specially when it comes to nominations. But I'm not going to go deep into it, I'm only saying three things before I go straight to my predictions:

1. "Best Director" is often given to the best movie, which is stupid, because there is an award for that already. You can make a terrible movie and still direct it wonderfully and revolutionarily. So yes, James Cameron should've won for 'Avatar'... and yes, Chris Nolan should be nominated this year, and should've won a long time ago.

2. I don't know what all the fuzz is about with Steve Carell's performance in 'Foxcatcher'. True, I never heard of John du Pont before the movie, so I don't know, maybe he does act exactly like him... but to me, the whole movie looks like he's trying super hard not to drop his fake nose, hence the stiffness and lack of expression. Again, I've never seen the real person speak, so maybe I'm wrong about this one. 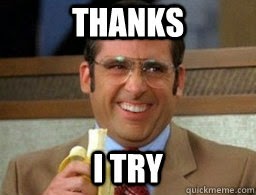 3. If 'Boyhood' wins.... crap... that will be awful. Does it have it's merit to film a movie throughout 12 years?... sure. Maybe that's a "Best Director" kind of merit..... but you cannot give "Best Picture" to a film they took the time to shoot in 12 years but not to edit. Seriously, it is SO long, and absolutely NOTHING happens. Really, NOTHING. 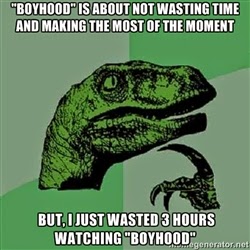 Okay, enough said... here are my predictions for only some of the categories (I am not going to bother with "Best animated short foreign language documentary").

"MAKE-UP AND HAIRSTYLING"
Not a super major category, but... 'Guardians of the galaxy'!!... because no 'Foxcatcher', you shouldn't win an Oscar for a stupid fake nose.

"VISUAL EFFECTS"
There is no way around it... sure, they needed to have some nominees, but the Oscar goes to.. 'Dawn of the Planet of the Apes'!!.. seriously, if not, I am personally sending a chimp with a machine gun to kill the members of the Academy.

"ORIGINAL SCORE"
The winner is Hans Zimmer for 'Interstellar'!! ... if you're not giving any credit to this GREAT movie... at least honor its great music.

"ACTRESS IN A SUPPORTING ROLE"
As sad as it makes me, I believe they're going to give it to Patricia Arquette!! for going fat and losing hair throughout twelve years.

"ACTOR IN A SUPPORTING ROLE"
One can only assume it is J.K. Simmons!! .. I haven't seen 'Whiplash' yet, but they are just giving him everything. I wish though, they would give it to Robert Duvall, he gave a great (literally crappy) performance (go see 'The Judge').

"ACTOR IN A LEADING ROLE"
Tough one... on the one hand Eddie Redmayne does a wonderful Stephen Hawking, although, isn't it kind of easier to play a guy with a disability? Plus, a lot of the acting is by the computer (ok, not funny). On the other hand there's Benedict Cumberbatch who does cry a whole lot in his movie. Knowing americans and their sometimes annoying patriotism Bradley Cooper has as good a chance as anyone, and he is really good. This is I think the most competitive category... if Leo DiCaprio was in it at least we would know who would lose. I am however going to go with the amazing performance of Batman!.. I mean Birdman!.. I mean Michael Keaton!!

It might go to Richard Linklater and it may be the one category in which 'Boyhood' deserves an Oscar. But screw that, Alejandro González Iñárritu!!

There are some good competitors in this one, despite the fact that 'Interstellar' was snubbed (seriously members of the academy, if all you want to see is true stories and tearjerkers go watch the news and stay away from the movie theaters). I think 'Boyhood' (more like 'BOREhood') and 'Birdman' are the strong ones... but... I'm going to go with a hunch on this one... the Oscar goes to "American Sniper"!!

If all my predictions are right, I won't see the need to address it. If not, I will surely be ranting about it next week. Until then...